I'm becoming a little concerned about my appetite. Since arriving in Boston a few days ago I've had very little to eat, and felt like eating even less. I had a fairly large meal on Saturday evening before boarding the plane. All I ate on Sunday was half a breakfast sandwich at a cafe and then a few fries later that night (not nearly enough to be considered a meal unto itself). Monday all I ate was a blueberry scone until late that evening when I had some ground meat, rice, and spices wrapped in grape leaves, and some fries. That could be considered a full meal.

This morning (2pm local time, 11am home time) I went out and got a 'Big Toast' (?) from Dunkin Donuts and a grande peppermint mocha from Starbucks. I got about 2/3 of the way through the sandwich before I was already done, though forced myself to finish it off. The coffee may sit for a while with only 1/4 touched as I don't really feel like drinking it anymore.

If this keeps up for the rest of the trip I'll likely have lost several pounds by the time I get back to Seattle. That could be good for my figure but bad for my health. I'd rather have good health than good figure but I don't have the appetite. *shrug*

Yesterday I discovered that there are no branches for my bank here in Boston. It wasn't a huge issue since all I really need is some cash so I figured I'd stop in at any other bank and make a basic ATM withdrawal. I found a bank that looked semi-local and stopped in.

The first teller is otherwise occupied so I get a new one. I explain what I want and put some of the money I just withdrew in the window. She stares at me blankly like a lower life form just spoke gibberish at her. I repeat and rephrase the request and get bits and pieces of the request repeated back, still like I'm asking for an unusual and undignified thing. She starts mentioning that she's out of rolls of dollar coins and waits, and stares, and waits, like she expects me to take a hint and walk off. I just stare blankly back at her while I wait for it to process (or accept I'm not going away). Even at my own bank they almost always have to go back to the vault to get the money so this is nothing new to me. She then starts to ask if I have an account there. "No." Would you like to open one? "No, I just need some cash exchanges." More blank staring like I just asked her to do something rude. She finally takes some of the money as the manager walks in and then asks the manager to exchange for rolls of dollar coins. I then stand there waiting for a couple of minutes while another customer arrives behind me. She's gossiping with the manager while the manager is getting the rolls of coins. When she returned I remind her I also wanted other bills with the rest of the money I put out and she takes care of that then gives me the roll of dollar coins.

"Is that everything?"
"Yep, perfect, thank you." (as satisfied as possible, possibly without letting on how rude she just was)

As I'm leaving I hear her greet the customer behind me like an intimate friend and they launch off in casual conversation and business.

At some point in the conversation I realized this may have been a race thing. It was at that point I made the connection that both of the tellers are black and that all the customers in the branch were also black. Only the manager who walked in during the conversation, a desk agent, and a business suited male customer who walked in as I was leaving were white. Huh. I may be oblivious to the subtleties of racial tension.

I left a note for the housekeeper to leave an extra soap bar including a 'please' and 'thank you!'. I just wanted to keep one next to the sink and one in the shower. I came back to my room and found this: 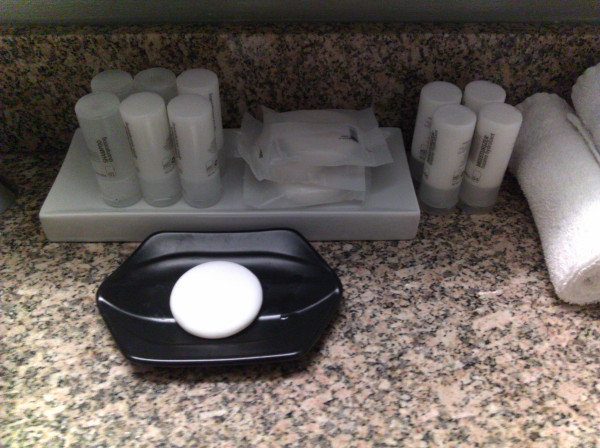 O.o Whoa. They weren't quite so neatly organized when I first found them (I did that as part of cataloging the new additions) but still...
Collapse